NB Power has one nuclear generating station - the Point Lepreau Generating Station which has been safely and reliably generating electricity since the unit was commissioned in 1983.

Nuclear safety is the primary focus of station activities. CANDU is an established Canadian technology with an excellent nuclear safety record, and Point Lepreau is a safe working environment. The station has exceeded one million person-hours without a lost-time accident on three different occasions.

In simple terms, fission occurs when a neutron strikes a particular isotope of uranium atom, called Uranium-235 creating the unstable element of Uranium-236. The extra neutron results in the U-236 atom splitting two fragments and releases other neutrons, energy and radiation. After moderation, the released neutrons go on to cause further fission and the cycle is repeated.

There are 380 fuel channels in the CANDU-6 reactor each containing 12 uranium fuel bundles. The uranium fuel bundle weighs about 20kg. Each bundle stays in the reactor between six months to one year. Through each fuel channel heavy water of the primary heat transport system flows to pick up the heat released by the fission in the fuel. This system called the heat transport system, takes this heat energy to the boilers where it is used to heat up and boil ordinary water to generate steam which in turn drive the turbine and generate electricity. 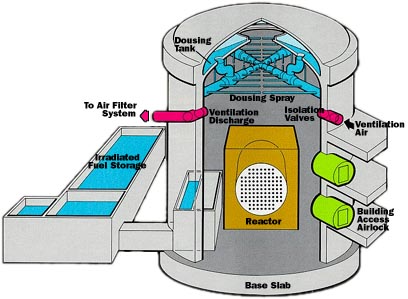 Check out this video we made with our education partner, The Gaia Project, to see more on how Point Lepreau Nuclear station works.