COVID-19 Information: Learn how we’re supporting and safely serving our customers during the pandemic.

COVID-19 Update: When delivering all energy efficiency programs, your health and safety is our priority. Learn more.

Our management team is comprised of New Brunswickers and long-time employees. Together, they’re working hard to make the right decisions for our customers today and tomorrow.

Keith Cronkhite was appointed NB Power President and Chief Executive Officer on April 1, 2020. A lifelong New Brunswicker, Keith has more than 30 years’ industry experience. He has held positions of increasing responsibility within NB Power operations and corporate, including his most recent role of Senior Vice President, Business Development and Strategic Planning. He is well known within the energy industry, and throughout his career has established strong working relationships with industry, government and business leaders.

Keith’s vision for NB Power includes a nimble, customer-focused NB Power that is well positioned to serve New Brunswickers while responding to a rapidly changing industry. He is committed to ensuring the customer is at the centre of NB Power’s business decisions, and that the utility ensures New Brunswickers have clean, reliable energy at stable prices for generations to come.

Keith has a Bachelor of Business Administration degree from the University of New Brunswick, has completed the Reactor Technology course for Utility Executives at the Massachusetts Institute of Technology. He holds an ICD.D with the Institute of Corporate Directors and is board member on the Energy Council of Canada as well as the Atlantica Centre for Energy. He is also a member of the Canadian Standards Association Technical Committee.

In March 2010, Darren was appointed Chief Financial Officer and in June 2016 was appointed the Senior Vice President Corporate Services. His areas of responsibility include Finance, Risk Management, Corporate Excellence, and Business Innovation services.

Darren is currently a member of the Board of Directors for the New Brunswick Energy Marketing Corporation (NBEMC). In addition, Darren has also been a past board member for the Nuclear Waste Management Organization (NWMO) from 2010-2019, the New Brunswick Investment Management Corporation (NBIMC) from 2010-2016 as well as the Northeast Power Coordinating Council (NPCC) from 2008-2010.

Darren has received the ICD.D designation from the Institute of Corporate Directors, has completed the Reactor Technology course for Utility Executives at the Massachusetts Institute of Technology and holds a Bachelor of Business Administration degree from the University of New Brunswick.

Since June 2016, Lori has served as the Senior Vice President, Operations at NB Power. She leads the teams responsible for safe and reliable generation (conventional), transmission and distribution of power across the province. Ms. Clark is also accountable for the employees who serve our customers everyday and those focused on modernizing the New Brunswick power grid.

Lori began her career with NB Power in 1990. Since that time, she has held positions of increasing responsibility including Controller, Managing Director of Finance, Executive Director of Regulatory Affairs and Vice President, Regulatory Affairs and Strategic Initiatives. Lori has extensive experience with the utility’s rate application process, appearing as a witness for NB Power at several rate hearings.

Lori holds a Bachelor of Business Administration from the University of New Brunswick and is a Chartered Professional Accountant. Lori has also studied Nuclear Reactor Technology at the Massachusetts Institute of Technology (MIT) and Leadership at the Wharton School of Business.

Brett holds a Bachelor of Science degree in Technical Business from New Hampshire College, as well as an Associate of Science degree in Nuclear Engineering Technology from the University of New York. While in the United States Navy, he attended the Naval Nuclear Power School as well as the Naval Electronics Technician School. Additionally, Brett has completed the Institute of Nuclear Power Operations (INPO) Senior Nuclear Plant Management Course.

Tony began his career at NB Power in 1989.. Previous to his current role, Tony was Vice President of Engineering and prior to that has held various Director and Executive Director positions within Distribution, Transmission, Project Management, and System Operations.

Tony sits on the Executive of Cigre Canada, is a member of the Board of Directors for the Northeast Power Coordinating Council (NPCC) as well as the Eastern Interconnection Data Sharing Network (EIDSN), and is a member of the CSA Strategic Committee on Power Engineering (SCOPE).

Lynn first joined NB Power in 1986 and was first appointed to the Executive in 2014 as Vice President, Customer Service, where she led the teams responsible for customer service as well as distribution and transmission field operations, construction and maintenance. She has held the positions of Director, Provincial Field Operations and Director, Retail Customer Marketing. Earlier in her career, she held positions of increasing responsibility in the areas of customer service, information systems and project management for corporate-wide initiatives.

Lynn holds a Bachelor of Business Administration from the Université de Moncton.

James (Jamie) Petrie was appointed Chief Legal Officer of NB Power in November 2020. Prior to joining NB Power, Jamie was the Executive Vice-President, Chief Operating Officer & General Counsel for Plaza Retail REIT. He is a former partner in Stewart McKelvey, an Atlantic Canadian law firm, where he specialized in employment law. He also taught employment law for seven years at UNB Law School and he co-wrote the book Conducting a Wrongful Dismissal Action, published by Carswell in 1997. 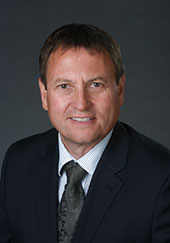 Kevin became the Executive Director of New Brunswick Energy Marketing in June, 2016. He has been with NB Power for 29 years, serving in various roles with increasing responsibility in both the Generation and Energy Marketing divisions.

He has worked on several major projects, such as commissioning and operating the Belledune Generating Station, Millbank and Sainte- Rose and was instrumental in developing the New Brunswick Energy Marketing group.